Saddingtons solid strip flooring is precision-milled, providing a wear layer that can be refinished many times over, ensuring a lifetime of enjoyment. It is manufactured with a tongue and groove profile that is also end-matched for a tight board-to-board fit. With proper maintenance of a polished timber flooring, it will continue to look just as stylish as if it was installed yesterday.

Underlays provide floor leveling, cushioning and acoustic properties. Saddingtons Timber has various quality underlays, such as the 2mm and 4mm underlay that can be installed with a Solid Strip Floor to provide a range of quality flooring solutions.

Technical Specification and Features of Underlay:

Saddingtons Timber Flooring meets Australian Standards and uses the aesthetic Timber grading system. Grading is categorized according to selective gum veins, spirals, burls, insect trails and other natural features that give its unique character.  The grading for Saddingtons Timber Flooring is, however, not graded for color variation or grain patterns as they form part of the natural beauty of timber flooring.

The 19mm solid strip flooring is available in three grades:

Saddingtons Strip Flooring is available in these Colors:

Australian Beech is a beautiful combination of highland timbers, carefully selected to create a unique colour that ranges from pale brown and golden hues to a light cream with a slightly pink tint.

Blackbutt grows in the coastal forests of New South Wales from Bega on the South coast up to Queensland. Its colours are evenly distributed, from light honey to golden nutty browns.

Brushbox is well-known for its unique properties and aesthetic qualities. It has a fine and even texture with a beautiful, rich colour. It can vary from pale pinkish grey to rich reddish brown.

Flooded Gum, also called as Rose Gum, is a large hardwood with shades that range from pink to pale red-brown, with the sapwood not clearly distinguishable. Its grain is straight and the texture is moderately coarse and even.

Forest Reds is a blend of Forest Red Gum and Red Ironbark, harvested from the coastal regions of east coast Australia. Its color ranges from pale pinks to deep, rich reds. When blended in flooring, the colours exude a particularly warm and luxurious feel.

Grey Ironbark is an extremely hardwearing timber with varied colours that come in a tight cathedral grain pattern.

Jarrah grows in the south west corner of Western Australia. The timber colour ranges from rich browns to deep reds.

Spotted Gum grows in the coastal districts from the New South Wales and Victorian border region to Marlborough in Queensland. Its timber has a strong appearance with a colour that varies from pale grey browns to dark brown or chocolate.

New England Oak gives off an authentic finish with its pale, simplistic light and airy, mid tone. This timber is ideal for a traditional look and feel.

The heartwood of Red Mahogany is dark red, while the sapwood is creamy in colour. It has a rippled appearance due to the interlocked grains and its texture is open and coarse.

Messmate is one of the most marketable timbers because of its wide variety of applications. Its colours vary from pale browns through to light yellows with subtle hints of peach. The heartwood is light brown and the sapwood is pale yellow to pale brown. The texture is moderately coarse, with interlocking grains that feature defined rings and gum veins. Messmate is often partnered with mountain ash as Vic ash or Tasmanian oak.

Karri exudes warm and earthy tones with its colours that range from pale pink to rich reddish brown and will complement and add beauty to any interior. Karri is extremely hard wearing with a high density, ensuring your karri floor will maintain its beauty and lustre for many years to come.

Stringybark is a blend of eucalyptus varieties native to various areas of New South Wales. Its texture is moderately fine and even with straight grains. Its light colours feature a blend of pale yellows to golden hues and light browns.

Sydney Blue Gum is a large hardwood species that grows along the coast of New South Wales and southern Queensland, but is also cultured in South Africa and South America. The heartwood colour ranges from dark pink to a reddish brown while its sapwood is lighter in shade. It has a straight grain with occasional interlocking of grain. Texture is moderately coarse and gum veins are common.

Tallowwood is an exceptionally durable hardwood species with unique colours of yellowish brown and olive green. Its grain structure has beautiful growth rings. Tallowwood is a prestigious timber that is sought after by architects.

Turpentine is a highly durable hardwood species that is commonly grown in New South Wales and southern Queensland. In colour, it varies from pale to dark reddish-brown through to deep chocolate-brown. It has a straight grain and coarse but even texture.

Tasmanian Oak is a combination of three Eucalypt species commonly found in Tasmania. The blending produces a beautiful array of pale cream to pink and reddish-brown. Its logs are quarter sawn to produce an extremely straight and even grain. 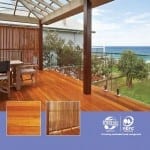 This is a guide on how to select a timber floor and timber species. It outlines the full Timber product range including solid strip flooring, parquetry and decking. Download Now.

The Species Quick Reference Guide that specifies hardwood and timber products. This guide is useful for designers and builders. Download Now.